The Process of Brain Injury 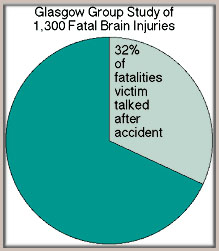 Far too many times brain injury goes undiagnosed because the process of brain injury may not be immediately apparent.

The Plaintiff was able to say: “Yes, I’m fine. I’m okay. I was wearing my seat belt,” to various questions.

When he exchanged information: “Look in my briefcase. There’s my business card.”

He knew where it was.

“In various combinations and various severities, the resultant cellular dysfunction (of brain injury) defines the nature and extent of the primary injury, the outcome of which may not become apparent for several days or even weeks after injury.” (Graham, Gennarelli, Greenfield’s Neuropathology, 1996, page 197.)

Shear Can Cause Delayed Effects

“It appears that ionic changes at cell membranes initiate events that cause a progressive cascade that can be potentially deleterious. Therefore, most TBI is not immediate. Brain damage is a process, and not an event, that is set into motion by the ionic fluctuations that occur immediately. ”

All of these explanations and quotes are examples of why traumatic brain injury is often missed.  So many times the victim of an accident doesn’t realize that they have been hurt and will say they are fine.  Even if there are some signs of confusion it may be blamed on “the shock” of the accident.  We also refer to it as the “Fog or War”. This is why it is so important to seek medical help as as possible or as soon as the signs become obvious.  Traumatic brain injury so many time goes undiagnosed.