Structure of the Neuron

The structure of the neuron is made up of several different components, but the portion of it which is most exposed to injury in a shear mechanism is the axon, the long thin protrusion which can extend substantial distances across different layers of the brain.

The Role of the Axon: The role that the axon plays as part of the structure of the neuron is roughly equivalent to the wire that connects a light switch to a light fixture. Like the wires in your wall, it may run substantial distances, as long as a full meter. Like a wire, it is thin. And like a wire, it transfers its signal by use of electrical impulses.

Axons are vulnerable. The axon is particularly vulnerable to injury when the brain mass begins to move as a result of rotational forces placed upon it, because it typically will stretch across layers of different density within the brain. When rapid acceleration/deceleration forces are placed upon the brain, the different layers, at progressively further distances from the fulcrum of the rotation will move at different speeds, creating a sliding effect of these different layers across themselves.

The effect of this sliding is that the axon is rapidly stressed beyond its tolerance, which may result in the axon being torn or stretched. Even if the axon is not entirely severed as a result of such force, it may be significantly damaged.. Again like the electrical wire, to protect the axon from damage and to assure that its electrical impulse does not stray from the appropriate channel, the axon is protected by insulation, called the myelin sheath. 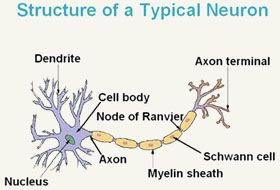 Unlike electrical insulation, the myelin sheath is not a continuous covering, but is made up of a series of glial cells, laid end to end over the length of the axon. The glial cells resemble rolls of paper towels, with the glial material wrapped many times around the core tube of the axon. And just as if you were to line up a row of paper towels across a room, at each juncture between one glial cell and another, there is a small gap in the insulation.

These gaps, called the Nodes of Ranvier, also serve an important purpose, allowing energy to enter the axon to boost the electrical signal as it traverses the length of the cell.

The potential harm to the neuron and the brain when this insulation is damaged, is discussed at The Neuron, at page 27:

“This multiple membrane layer, which also happens to be unusually rich in lipid, insulates the axonal cytoplasm (the axoplasm) from the extracellular fluid. This means that the electrical current can flow across the axonal plasma membrane only at the nodes, and as we shall see in Part II, this has profound implications for the speed of transmission of electrical signals along the axon.”

In other words, when the the axons insulation as part of the structure of the neuron is disrupted, the speed of information processing within the brain can be profoundly effected.

Axonal Injury Without a Blow