Brain Injury Shear – Axonal Injury Without a Blow to the Head

Diffuse axonal injury can occur without any direct impact on the head, as it requires only the condition of rapid acceleration/deceleration such as takes place in whiplash injuries due to acceleration/deceleration resulting in rapid flexion-extension movement of the neck. This in turn will cause brain injury shear which means that brain matter is sliding with in the skull and can cause damage.

This sliding of brain tissue, is illustrated by the next two graphics: 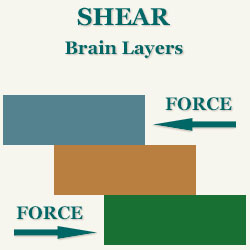 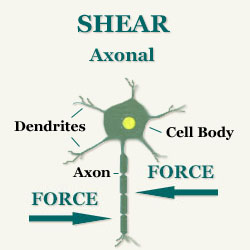 Injury at the Axonal Level, cont…